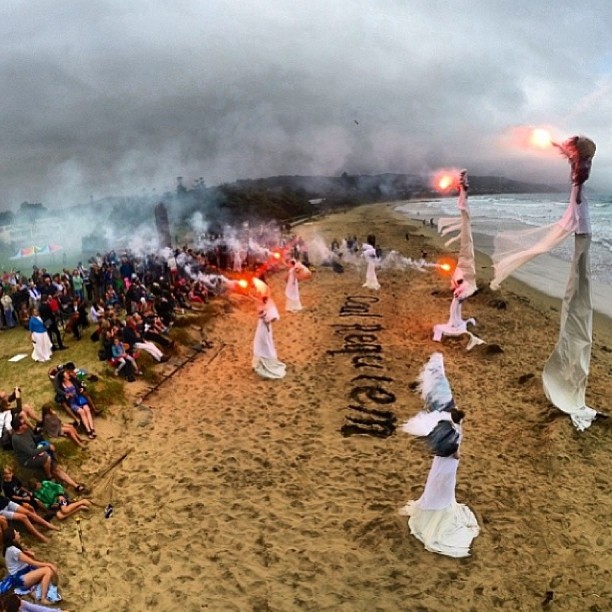 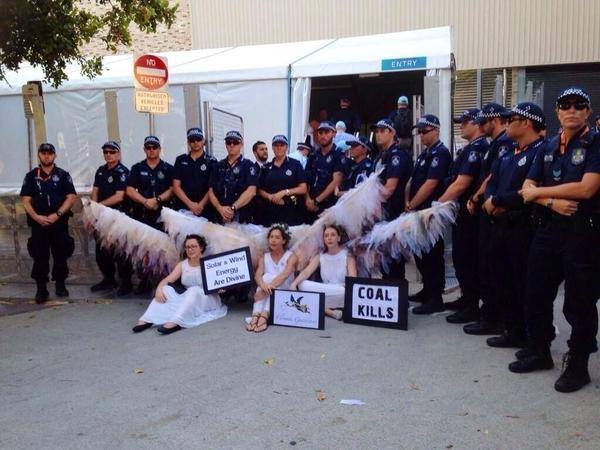 Occupying the secret VIP entrance of the G20 conference in Brisbane, November 2014. The subsequent deal brokered with police earned the Courier Mail’s ‘Most Aussie Moment’ of the G20 award. 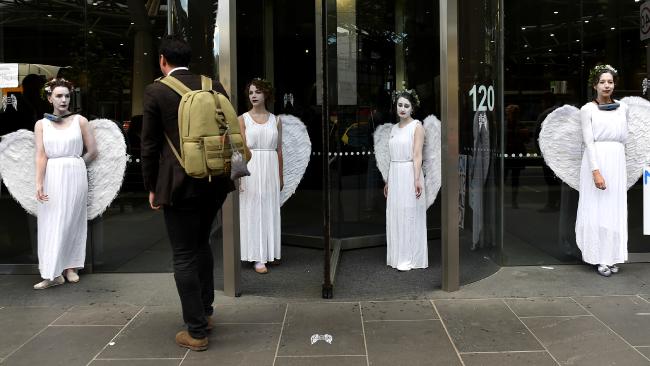 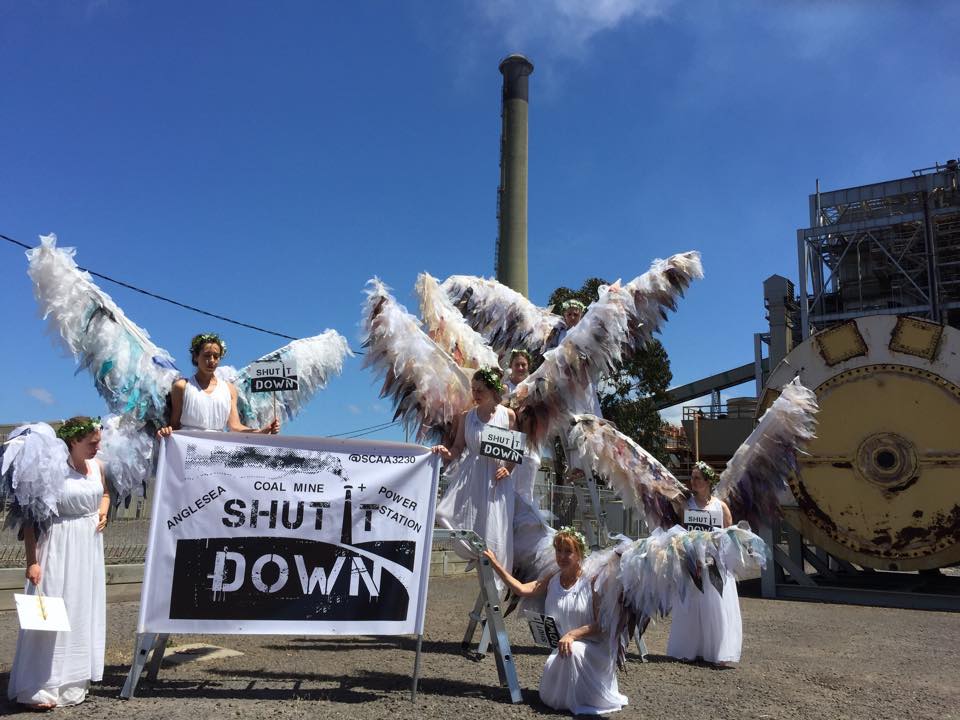 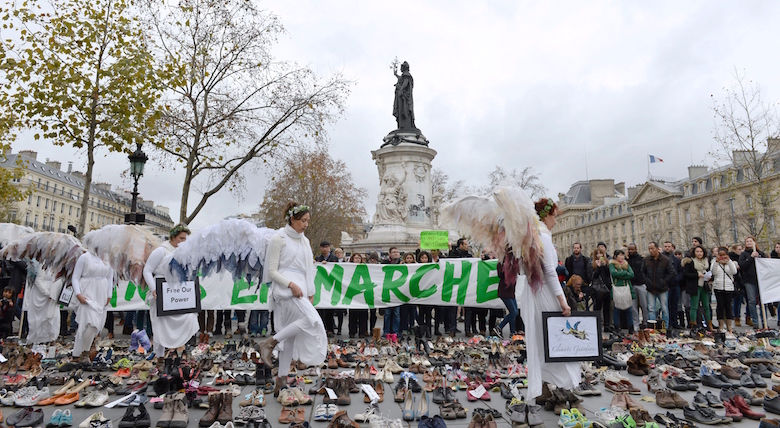 With utmost respect and compassion for how Parisians were feeling following the brutal Friday 13 terrorist attacks in Paris, Climate Guardians defied the State of Emergency declaration that strictly limited civil society movements, including public protesting, during the UNFCCC COP21 climate negotiations that led to the Paris Agreement, December 2015. This image was taken on 29 November 2015, on the eve of the official opening of COP21, at the Place de la Republique which then served as the peoples’ shrine honouring those who had lost their lives or been injured in the horrific attacks a few weeks earlier. As mass climate marches were being held in cities all around the world, on behalf of all those unable to march in Paris, Avaaz placed more than 20,000 pairs of shoes (including a pair from Pope Francis) as a symbolic and peaceful call for UN delegates to be determined in reaching a global agreement to tackle the climate emergency. Photo credit: Miguel Medina/AFP/Getty Images. 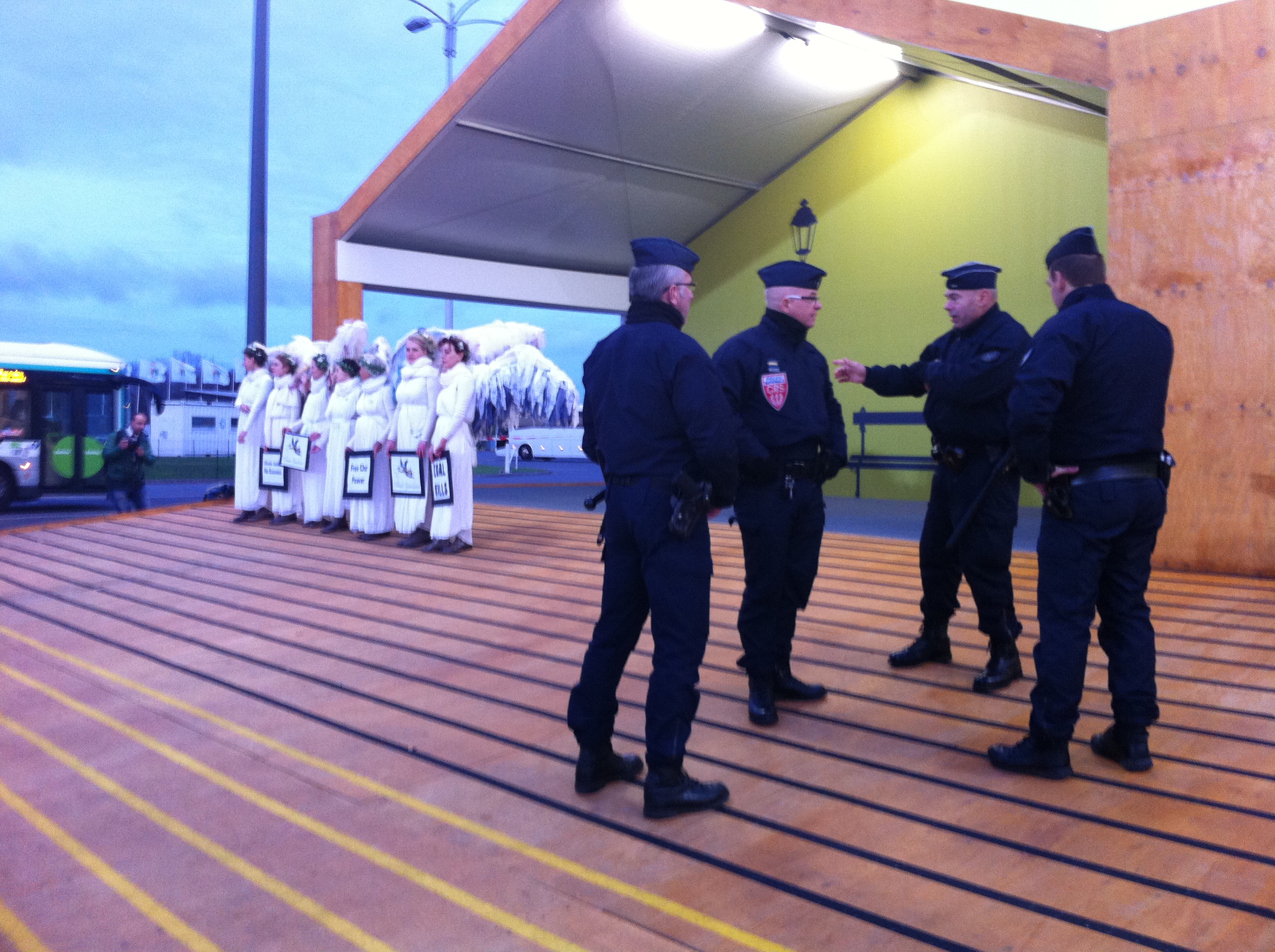 Greeting UN delegates at the conference centre in Le Bourget just after daybreak on Day 1 of COP21. 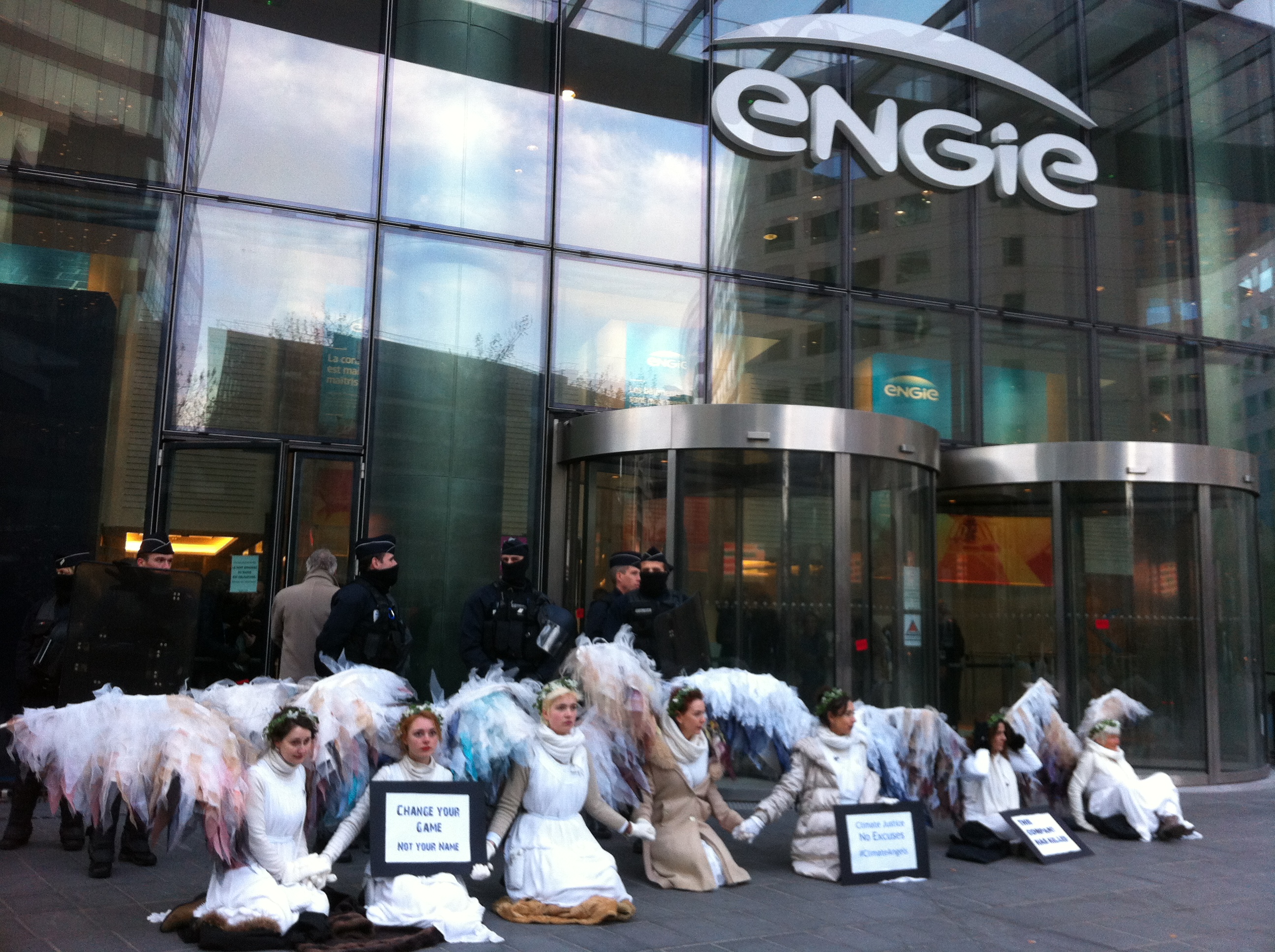 Blockading Engie’s global HQ during COP21 to call the transnational energy corporation to account for its reckless and self-serving approach to business that directly resulted in the disastrous Hazelwood Mine Fire in the Latrobe Valley. Hazelwood officially ceased operating on 29 March 2017. 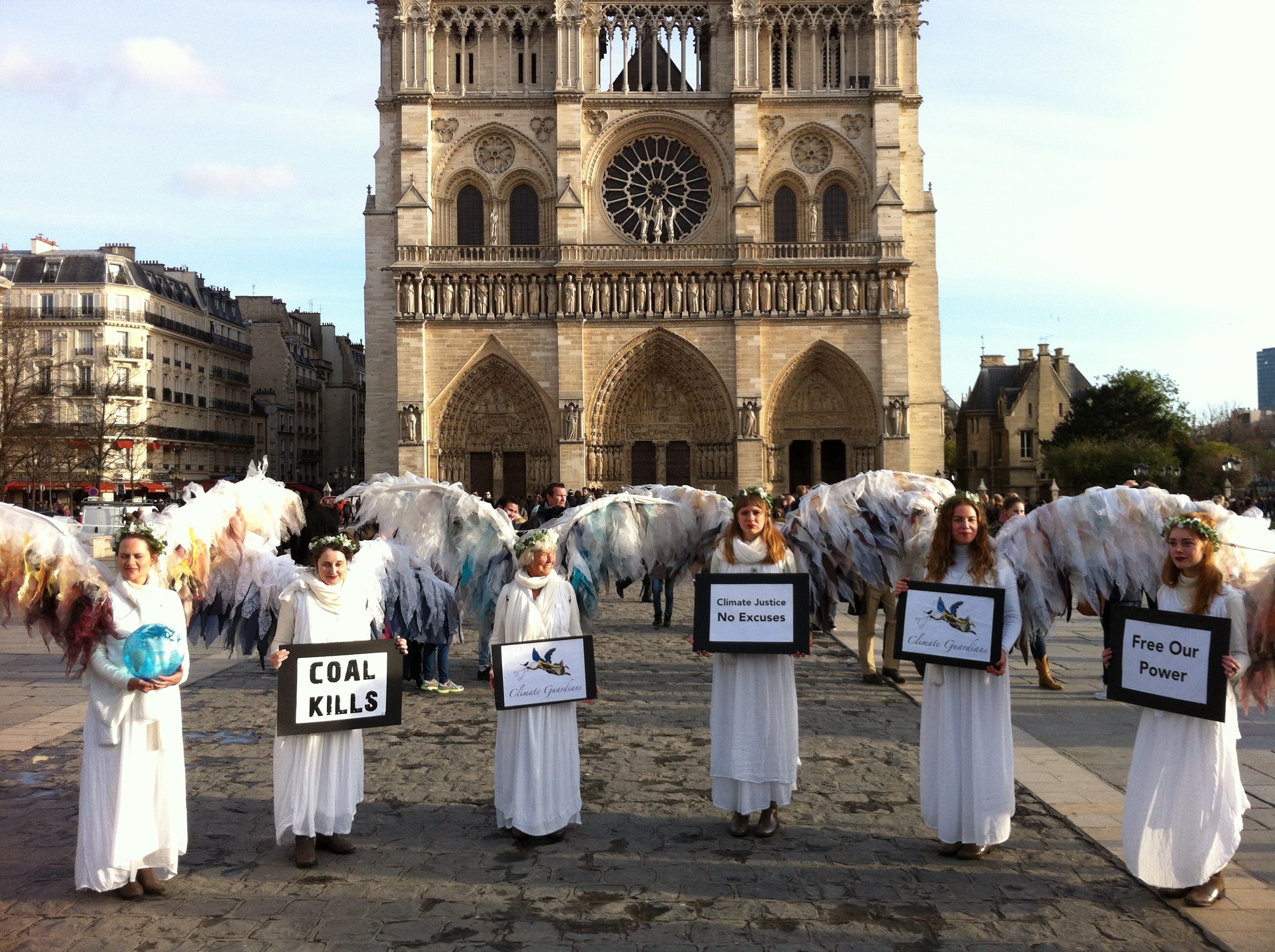 Australian children’s heart-felt messages to UN delegates featured prominently in Climate Guardians‘ street performances for ArtCOP21. To increase their reach, a number of letters were left tied to posts and taped to ancient street walls, December 2015. 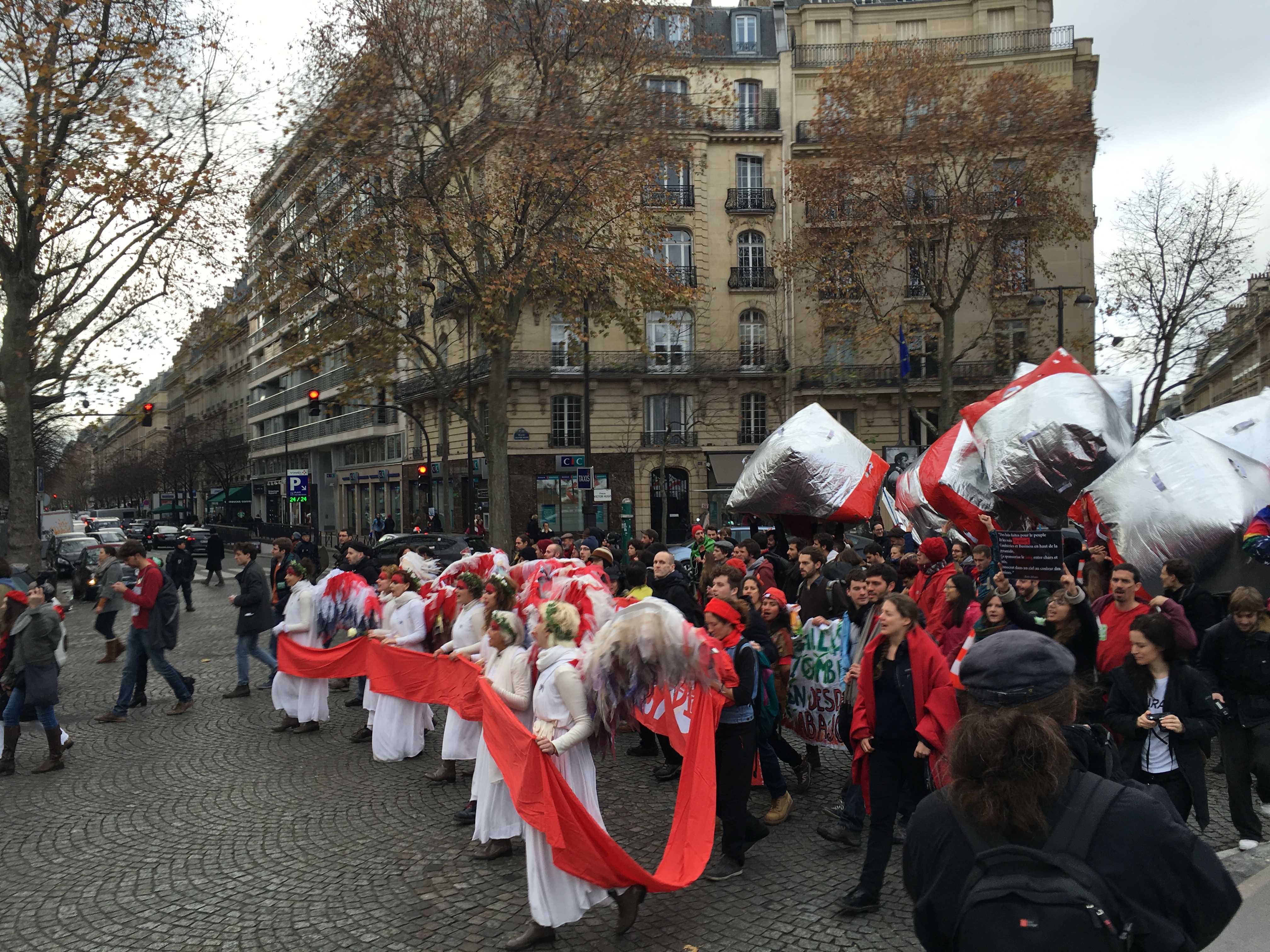 In protest of the deep injustice and lack of ambition inherent in the Paris Agreement, Climate Guardians broke through police barricades to lead a crowd of more than 10,000 through the Paris streets on the last day of COP21, December 2015. Activists from all around the world marched that Red Line around five kms from L’avenue de la Grande Armée to the Eifel Tower and occupied the bridge over the River Seine for more than an hour. The Red Line symbolises a crossing of the Earth’s critical physical and social limits; it marks a non-negotiable no go zone where wholesale systems collapse. 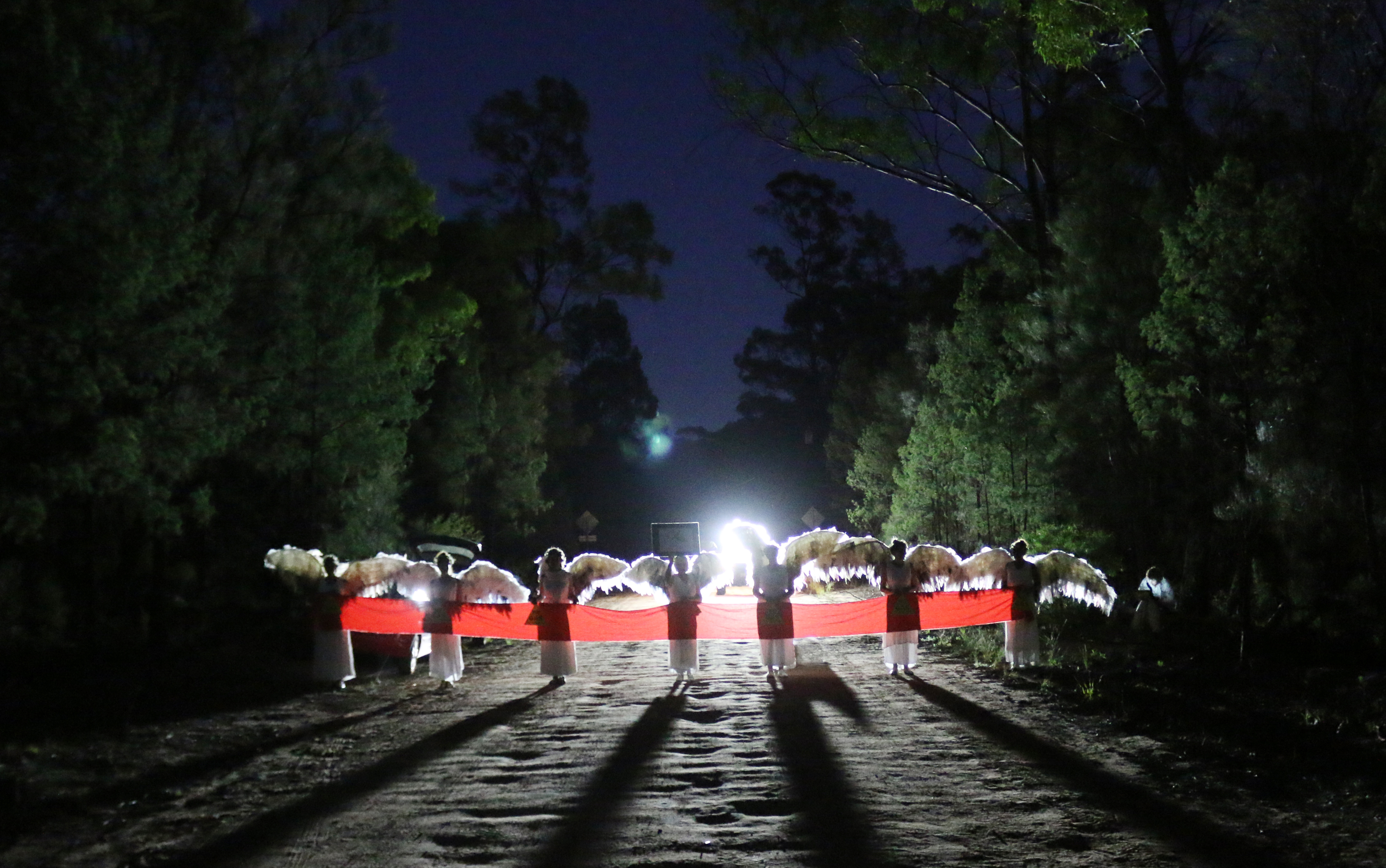 Staging a dusk performance action at the National Gallery of Victoria, involving petrochemical waste that had been collected from Melbourne’s Yarra River to highlight the contradiction of having people who help enable the pollution and destruction of the natural world in prestigious positions on the Boards of proud Australian arts and culture institutions. 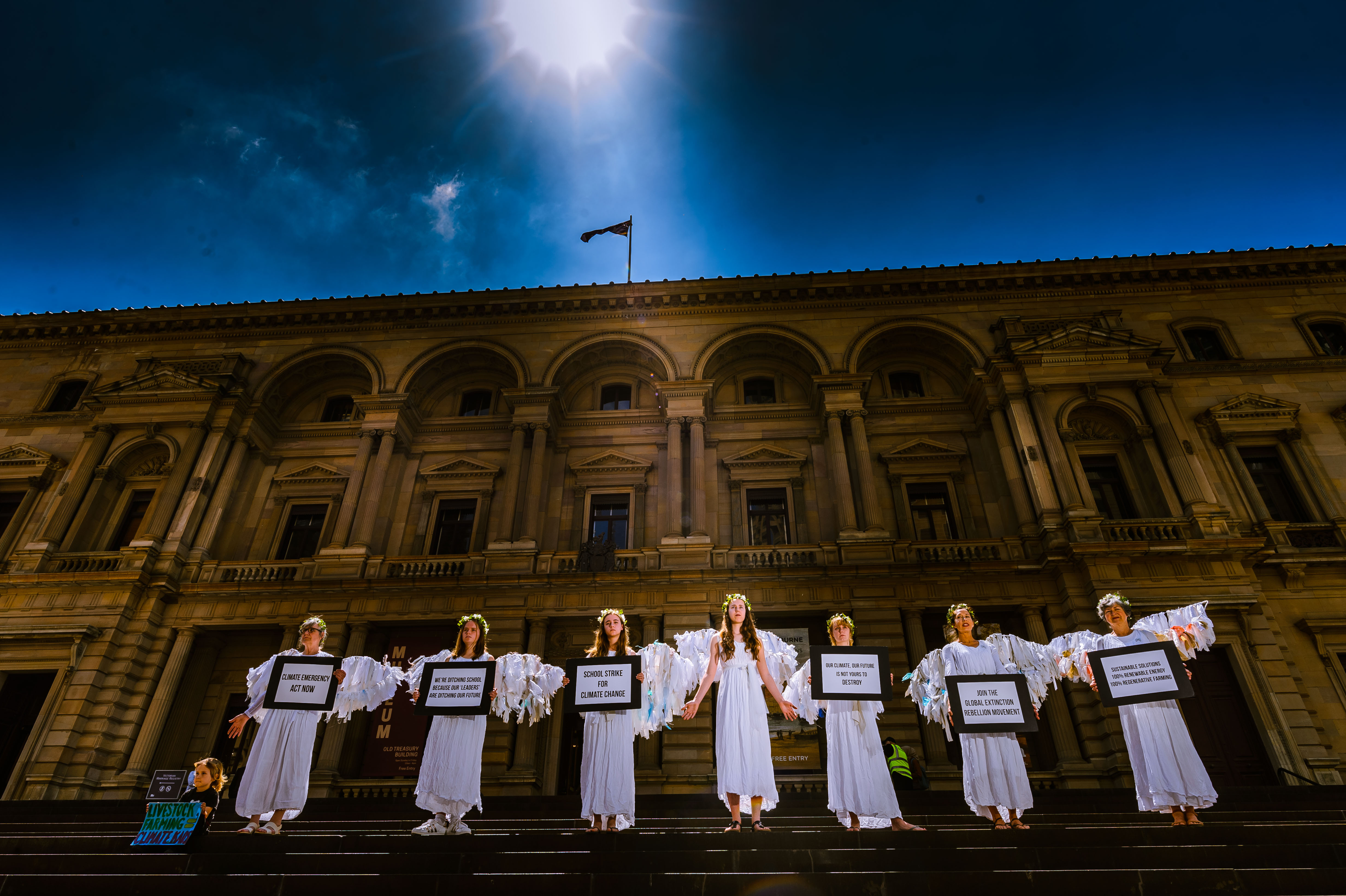 Strategically timed to help support the global day of climate action on Saturday 17 November – with demonstrations and civil disobedience expected in a dozen or so countries – in Melbourne Climate Guardians heralded the Australian chapter of the international #ExtinctionRebellion movement calling for radical action to address the escalating global climate emergency, November 2018. Photo credit: Julian Meehan. 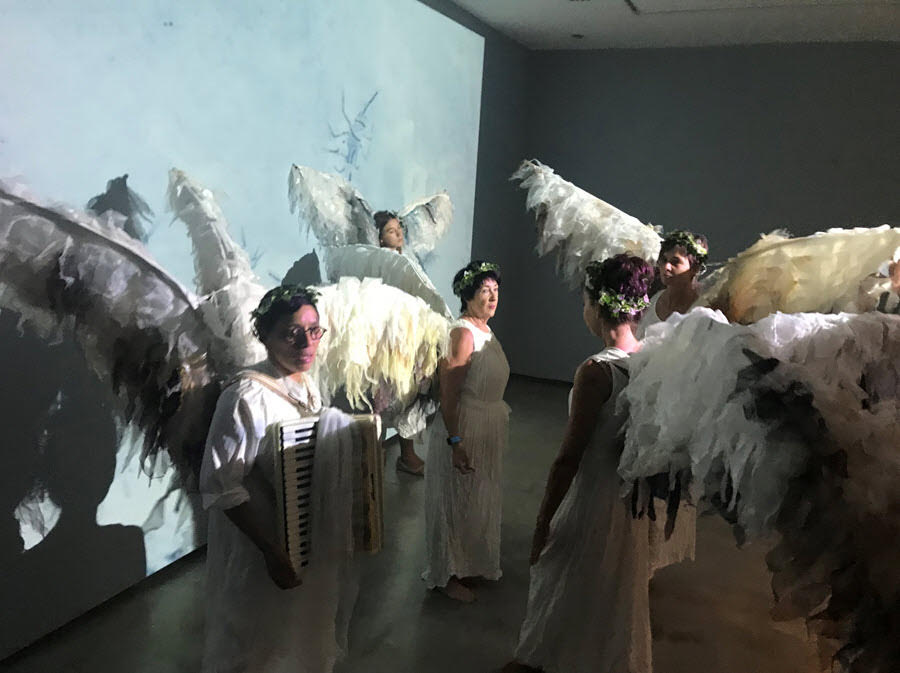 Performing at the official launch of Janet Laurence: After Nature at the Museum of Contemporary Art Australia (MCA, Sydney) on the last day of Australia’s searing Summer of 2019, unprecedented for its extreme weather events. Written especially for the performance within Janet’s Deep Breathing: Resuscitation for the Reef installation (first shown at the Musee d’Historie Naturelle in Paris during COP21), What Lies Beneath by Irish Australian poet Anne Casey expresses deep grief over the loss of the Great Barrier Reef due to reckless, shameless greed and corruption. 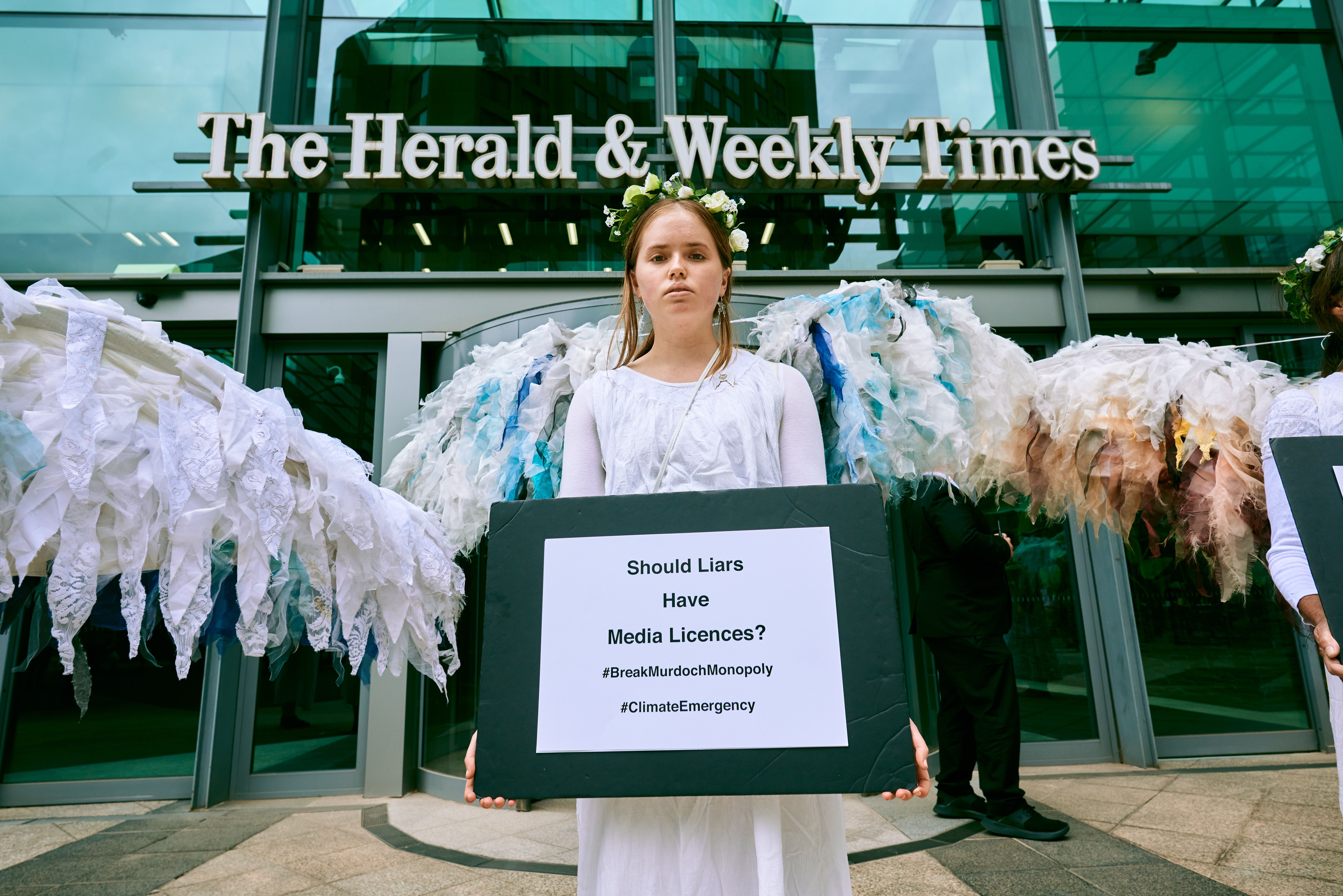 ClimActs’ founding act is the Climate Guardians who use angel iconography to highlight the vital role of guardianship of precious natural resources in addressing the global threat from the climate emergency. Graceful, haunting, and iconic, the Climate Guardians attract people to them with a beautiful simple clear message of hope through collaborative, effective climate action. Appealing to justice and fairness, they urge care for the precious natural world to protect children and future generations from the imminent twin threats of climate breakdown and mass extinction.

As Climate Justice underpins their work, Climate Guardians are particularly concerned about how global warming is impacting on Indigenous communities and females from developing countries who bear the burden of providing for children and protecting them from the ravages of extreme weather. Females are more vulnerable when forced to flee homes rendered uninhabitable from conflict sparked by resource wars or climate catastrophes. Climate Guardians view calls for developing world economies to have so-called cheap, plentiful electricity from fossil fuels as cynical attempts by polluting energy corporations to gain access to new markets as well as further access to cheap labor in places that cannot afford the luxury of guarding against human rights abuses and protecting arguably their greatest common asset, their environment.

The exploitation and domination of females by the patriarchal globalised economy echoes that of nature and developing countries by imperialist capitalism. As they are most economically reliant on the services provided by nature, women in the developing world experience most acutely the detrimental effects of the destruction of the natural world by racist patriarchal capitalism. Through destructive business practices that put profits before people, the globalised capitalism rips apart the delicate balance of co-existence that humans and nature have developed over many generations. In addition to fuelling resource wars and the climate emergency, the globalised drive towards so-called ‘progress’ through western industrial, extractivist and exploitative development is reinforcing gross and increasing inequity within and between nations.

Meanwhile, major advances in ecological science and sustainable technologies are enabling us to create everything we need to meet basic food, water, power, shelter and education needs necessary for healthy and happy lives in fair and sustainable economies at the local level on a global scale. Effectively addressing critical and converging societal problems (deepening inequity within and between nations) and ecological crisis (the climate emergency and mass extinction to name a few) demands globally cooperative, democratically organised societies based on facts, fairness, and justice.

In addressing such highly complex, interconnected issues within a developed and largely secular western world that is cut off from nature, ClimActs channels the power of the creative arts, one of the only doorways still available into the spiritual realm*.