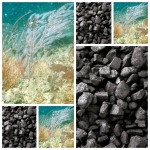 We, with our winning smiles, tweeting environmental

to sing the rewilding of grasslands, reefs, native title—

Who knew that Subrata Maity and Claude Alvares

defended the Mundra, or Mormugão Port in Goa from

pollution violations?  The permits were not revoked.

When 10 per cent of robots lived in cities compliant

with WHO air quality guidelines, when the black

blast, we dialled up air cons, we talked prophylactic

gene editing, from monkey to pig to Homo Saps.

We wrote dirges for the third world, prohibiting diesel

with a corporate warrant to exhume the Galilee basin.

Everyone was abused; the state’s litigations, economic

Photos in collage from: CSIRO CC BY 3.0 (http://creativecommons.org/licenses/by/3.0) via Wikimedia Commons