The poetic register is perhaps the most suitable vantage point for flight. Words (and images) are released from the page to re-form in the reader’s mind. The voice of the author becomes akin to a Sloterdijkean ‘soul expansion’, his or her attention travels beyond the corporeal home, and, according to the logic of an ‘archaeology of the intimate’, facilitates a meeting place for a ‘poetics of the inhabited interior’ (Sloterdijk 2011, 17–20, 83–90). There is an intimacy in such a flight, as a shared interior space opens – whereby isness is interrogated by both place and form with a kind of friendship in play, floating in an embryonic bubble – transparent, fragile, porous, animated, vital.

If all of this sounds a little too removed from a review of a slim volume of Australian poetry, then the volume in question is not fully appreciated. David Musgrave has produced a delight for the eyes, ears and mind in his book-length poem – which has as its central preoccupation, the isness of voice. A highly innovative, beautiful and scholarly work, Anatomy of Voice is both elegy and exploration, a tribute to a teacher and friend (the late Bill Maidment) and a meditation on the many connotations of voice. It is also a rather handsome addition to any library.

Musgrave explores the shifting sands of the question of voice through four structural partitions. The first comprises twenty-four poems that each include the ‘ghosting’ of a sequence of words in reverse that bleed through from the facing verso.  Each poem enfolds a world of voice and the world in which voice sounds, exploring the darkness that is also enfolded in its absence, a wonderful example of which opens upon the play of body and language, silence and voice, folds and fontanelles (13): 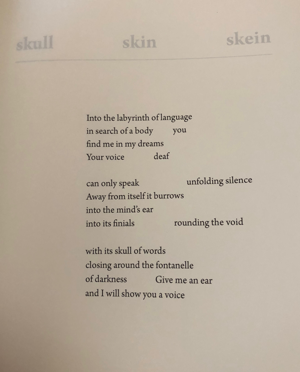 The second partition responds to (and takes flight from) several beautifully reproduced Renaissance wood-cut engravings, commencing – evocatively – with Guillaume de La Perriere’s emblem of a man trying to catch the wind with a net. This is a ‘visual poem’ that poignantly speaks to the tension that Musgrave explores between language and isness, between authorial intent and form, and the nature of the phenomenon of voice that continues to evade capture (50): 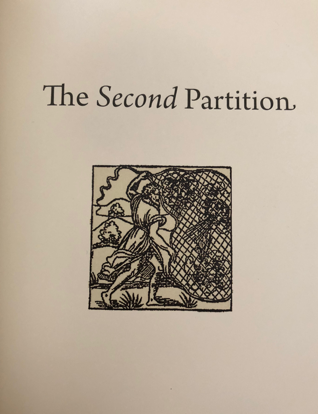 ‘Voice’ is – in its nature (is it?) – rather evasive (hard to capture / complex and sonorous) and opaque (hard to see-through / orotund – from the latin, a ’rounded mouth’). It is a sphere of contestation, and Musgrave deliberately problematises any ‘demand for authorial voice’ (77). Who is speaking? Musgrave? Maidment? Us? No-one? Everyone? Everything? Musgrave provides a rigorous and delightful interrogation of self and speech throughout his third partition in particular, replete with echoes of poets, writers and philosophers (Eliot, Milton, St Augustine, Kafka, Beckett and many more)*, utilising footnotes in the ‘voice’ of his friend, lifted directly from three of Maidment’s articles from the 60s (77):

Diogenes went to the city

with his lantern, his tub, his sun

You went from Scone to Sydney

with your Keats, your charity and wit

But where are your poems now?13

and who is speaking here?14

Some soft thing stirring softly soon to stir no more15

__________________
13 One may also presume, supposing the lost material analogous to the saved, that nothing of ‘intrinsic literary importance’ has been lost, and still regret that loss. W.M.
14 The demand for authorial voice masks a demand for proper moral answers, imperatives or formulations; and ‘unity’ becomes a consequence of issuing the right views, of being spiritually mature. W.M.
15 Necessarily a sketch, a preliminary rough ordering, a feeler towards further work? W.M.

Of special note from an ecopoetical perspective are Musgrave’s allusions and appropriations of Country, the ‘voice’ of the bush, where ‘tadpoles throng’ and ‘mosquitoes fizzle’ (68), where we hear the ‘song of the nightingale on the plum-branch’ (81) and where we explore ‘river gums    silver wattle   cicada-realms’ (75). A depth of connection to Country permeates the volume, culminating in a mighty procession of ‘voices’ that Musgrave presents while bringing the reader along on a bush walk (78). A feast for the ears as well as the heart.

I won’t transcribe it here for the simple reason that it simply must be read in its entirety to ensure that the cumulative power of so many voices is deeply heard. I will, however, offer this suggestion: take the volume with you into your favourite patch of Earth and allow the voice of both word and world (and the interplay between Musgrave and Maidment’s worlds and your own) to be heard together. For me it was a trip to the Olive Pink Botanic Gardens in Mparntwe / Alice Springs, nestled close to the bank of the perennially dry Todd River, which was lined with majestic Ghost Gums with roots that delve deeply into the precious water flowing beneath the ground. The Gardens provide a network of walking trails that allow the visitor to enjoy over 600 arid-zone Central Australian plants and an incredible variety of birdlife.

I sat on one of the well-appointed benches in the middle of the Gardens across from a lively Western Bowerbird’s nest and allowed the voices in my own head to soften. The sound of his poiesis as well as the voices of a plethora of other birds floated into my consciousness as I took up Anatomy of Voice, enjoying both the space around me and the space offered by Musgrave’s words. As I finished reading the delightful list of bush voices which concludes with that of the kangaroo, the relative silence of my inner world was punctuated by the sound of a large Euro bounding across the path before me, startling me and causing me to lift my eyes from the page and smile deeply, offering a silent prayer of gratitude for the words on my lap and the Country beneath my feet and the way both had conspired to produce a beautiful experience in my own sphere.

The final partition of Anatomy of Voice is elegy at its finest and is worth the price of the volume for the single page of wonderfully woven words that both release and intimately bind Musgrave and Maidment’s voices. The woodcut accompanying this section is Joannes de Boria’s ‘two globes touching’ which serves to emblematise Musgrave’s central preoccupation with the isness of voice (with one element of its subject matter, the blended ‘voices’ of Musgrave and Maidment). In a way Musgrave’s preoccupation is recast here in relation to the intimate connection of ‘globes touching’ which in turn effects a shift in the focus of is-ness to (if I may intone Sloterdijk again) where-ness, to an exploration of the point at which two worlds meet and the space where two inhabited interiors are given voice.

In concluding, this remarkable book-length-poem (that incidentally begins with Beckett’s disembodied voice floating through the dark on the front facing page), Anatomy of Voice provides in its final words a fitting note whereby ‘the worlds we inhabit’ touch and the voice that we ‘carry in the mind’s heart’ is both ‘trace’ and ‘point on the boundaries of our selves’ (87). Mr W. M. is noted as the ‘only begetter of these ensuring verses’ (so Musgrave inscribes) and we all the richer for their birth and for the erudite and potent voice/s that is/are gifted, interrogated, and released in the pages that contain them and that subsequently give them flight.

* For an exploration of the wealth of allusions in the work, the Plumwood Mountain reader is encouraged to read Michael Sharkey’s wonderful review of Anatomy of Voice in the Southerly 76, no. 2 (2016) which places the work in the context of Musgrave’s oeuvre, Maidment’s life and the history of poetic discourse in general.

Mark Crees is from Sydney and currently lives in Alice Springs (NT). He holds a Bachelor of Letters (1st Class Honours) in Philosophy from Deakin University, two Masters degrees from the Melbourne College of Divinity, and a PhD in Critical Theory from Monash University’s Centre for Comparative Literature and Cultural Studies. His doctoral work entailed a somacentric exploration of Georges Bataille’s oeuvre that focussed on the importance of the poetic register (and the Arts in general) to frame and explore the human condition and the inability of discursive language to adequately capture it.