In a more perfect world (where there are fewer crippling complications) Stuart Cooke’s multi layered and lyrical verse translation of a Traditional Song Cycle would probably be what most of us would like First Nations literature to look like. It is a richly collaborative project bringing together the creative energies of Traditional Owners and a non-Indigenous academic and poet. Cooke’s book is a proud celebration of Nyigina Culture and Language and makes an invaluable contribution to Cultural maintenance.

In publishing his “song-poem as a verse-in-translation” Cooke runs concurrently on each page four versions of the song-poem: firstly there are extracts from the story in Nyigina language; then there are a number of short mediations on the story through the voices of Butcher Joe, Roe or Dyungayan; this is followed by the translation of the anthropologist and linguist Ray Keogh; before finally we are given Cooke’s more contemporary poetic translation. This presentation of the four versions of the song-poem works together seamlessly in what is a stunning collaborative performance.

To further highlight some of the unique narrative continuities/discontinuities in the structure of the original group performed song-poem Cooke scatters his expressive lines across each page and employs such innovative typographical features as varying font sizes and brackets (to suggest space, translation difficulties and “haze” or uncertainties built into the oral texts). Thus the first page of the song-poem begins with a few lines of Language, followed by some interjection by Dyungayan and Roe in Language and Aboriginal English before we are given Keogh’s summary and translation: “Bulu and his rai come out from Wanydyal and contemplate the direction they’re going to travel across their country” (44). These versions of the song-poem, and the way Cooke values them, are integral to the text and beautifully lead the reader into Cooke’s own original and stunning line scatterings of verse translation: 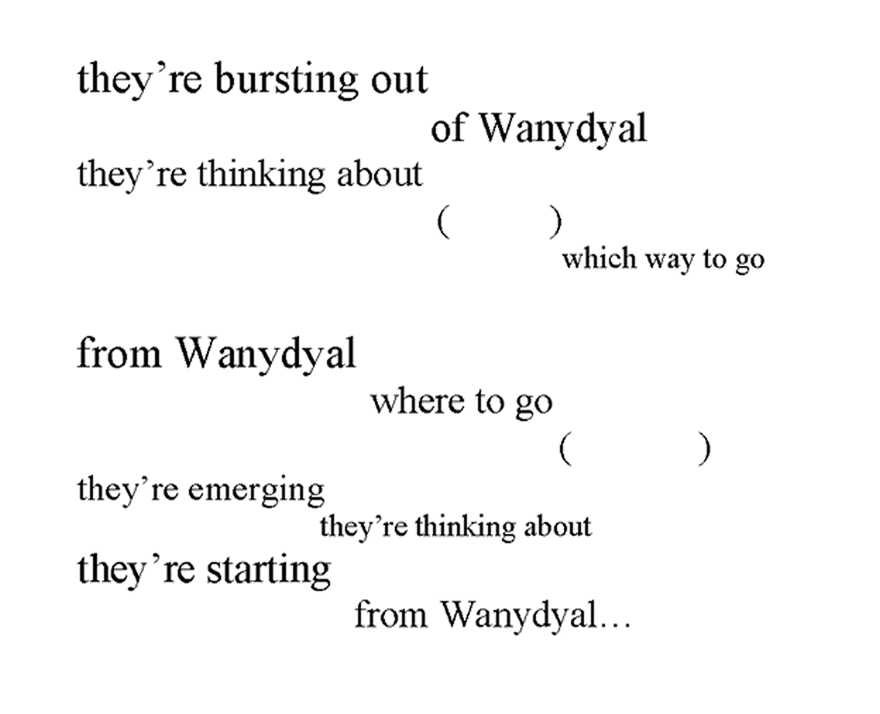 This unrestricted song cycle from the Bulu Line is a collection of 17 songs and was received by George Dyungayan in a dream from his father (the late Bulu) before being passed onto Paddy Roe and then onto Phillip Roe (a Goolarabooloo elder). We are fortunate that the custodians of this story have chosen to open it to the world via the conduits of Ray Keogh and Stuart Cooke. The story begins with the spirits of George Dyungayan and his father, Bulu, emerging from Wanydyal (a waterhole). They then travel in a loop, dancing and singing across country, as they encounter various animals and spirits (including a rainbow serpent’s ferocious storm as payback) – this is a remarkably magnetic narrative powerfully and respectfully rendered by Keogh and Cooke. George Dyungayan’s Bulu Line is certainly a charismatic model for the “song-poem as a verse-in-translation”.

Lionel Fogarty’s Eelahroo (Long Ago) Nyah (Looking) Mobo-Mobo (Future), on the other hand, is an unflinchingly uncomfortable read interrogating colonialism’s crooked paths with devastating impact. Fogarty combatively stakes his voice somewhere between Aboriginal English and Standard Australian English as he confronts the social and political realities of contemporary dispossession, racism and victimisation and the painfully recalcitrant attempts by the non-Indigenous Australian hegemony to address Indigenous injustice and disadvantage. At times his uncompromising voice of indignation and anger verges on that of a rant but the energy and forcefulness of his poetic is, to me, irresistible.

In his long poem, “CAUSED US TO BE COLLABORATOR”, Fogarty writes so memorably a hymn of praise to Oodgeroo Noonuccal and Kevin Gilbert because “Australians need to know, survival by Black writers who talk …sovereignty hits the heart to love” (102). In sections of celebratory prose poetry Fogarty writes:

I witness spiritual reflect of great experiences in they are apart of all our ultimately writer fighters even lovers of the sentences to go on forever.    (104)

They lived near white foe but never stole their ideas or rid to get rips. They were common but differ in how to pawn the way over and around the Miggloo (GHOST people) brains.    (104)

While in “Historical Upheavals” he asserts the right of Indigenous people to speak on their own behalf:

Walk white fellow, as you all can’t write

Our battle just as your sunrise and night sigh ties.

The noble note runs in our native modern now from then.

His poem, “Conservative Sells”, returns to the theme of the dangers for First Nation voices who collaborate too closely with the non-Indigenous socio-political hegemony for short-term financial or career security. This poem is very critical of Aboriginal leaders or writers who “play white games” because as Fogarty sees it:

Here is the Modern humorous

Aboriginal best known to be conservatives

And black students who just care bout getting

Translate this and we get them thinking white

This is vitally important to Fogarty because as he writes in his book’s closing poem:

Remember the smell dreams of futures

First Nations writing is not only important in giving voice to minority peoples; but it is here, in the Traditional Song Lines and in the poetry of such contemporaries as Lionel Fogarty, Samuel Wagan Watson and Ali Cobby Eckermann that we can hear many of the most innovative, dynamic and politically engaged writers working in Australia today. As Fogarty himself so memorable challenges in “VOTE NO? HO”:

Earth in focus world words around.

Member those light in side cells life’s death

Give Forest Its Next Portent