So what is a quad? The OED and the Urban Dictionary together give us twenty definitions, but none of them applies to Chris Mansell’s collection. Here is what she says: 'Fifteen characters, eight single-spaced lines, interlinked four times = one quad poem. Four hundred and eighty characters exactly.' (106) 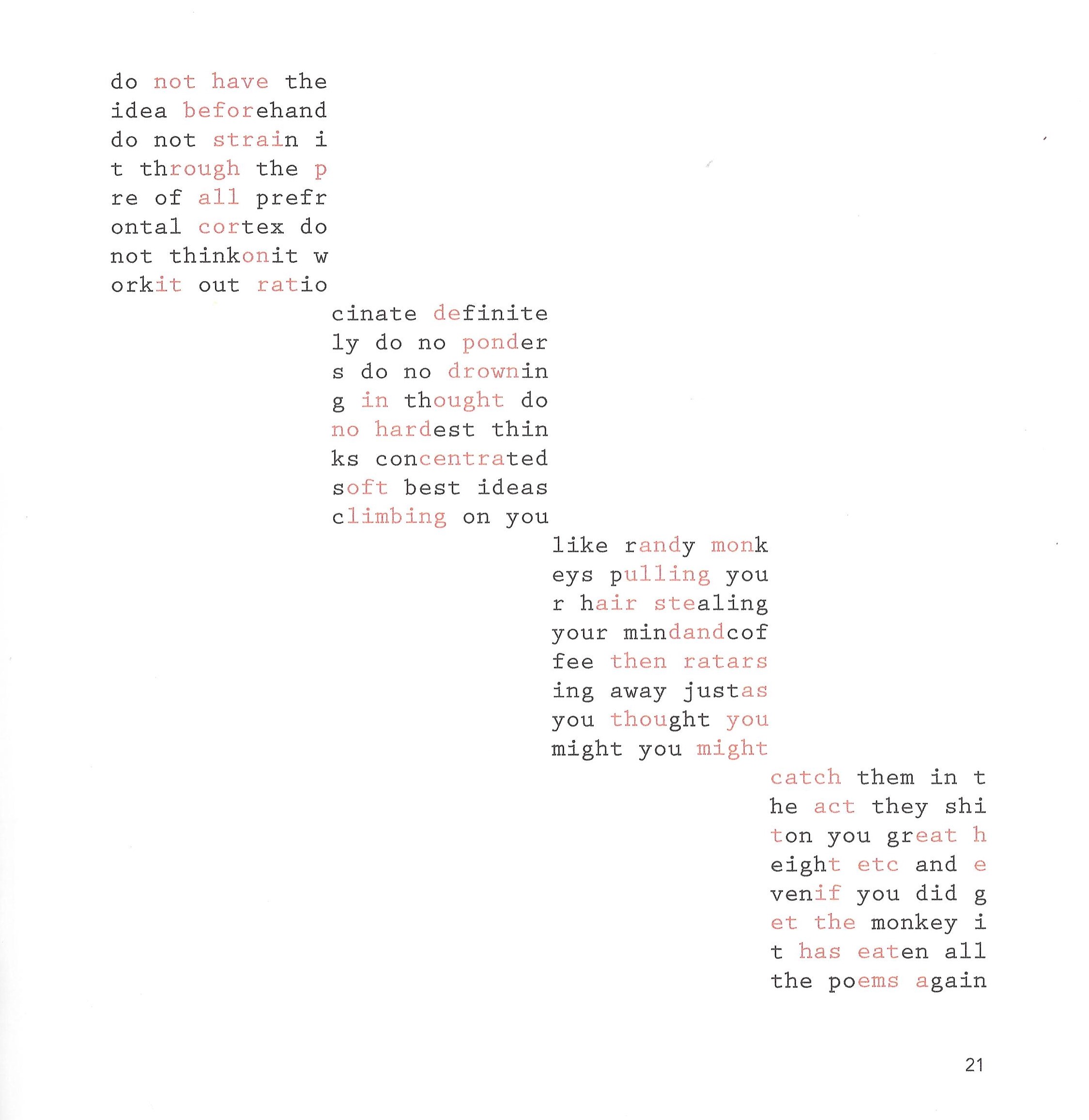 As you can see, these visual poems are in a font with no proportional spacing and include 'portmanteau interiors which can be sound-mined for red to produce new elemental poems which can be read (aloud) separately' (106).  More of this later, but this poem on page 21, ‘[on writing poems]', is representative of the style throughout the book. There doesn’t seem to be a canonical definition of vispo, especially in contrast with concrete poetry, and this particular book lends itself to separating the two aspects. I’ll start with the po alone, which I admit means trying to separate cognitive meaning from visual impression – but this seems to work best at the moment.

The poetry roams comfortably over a wonderfully broad range of topics: deserts and war, politics, love, poetic creation, history, nature, moments in the depths of the psyche. A poem titled ‘[do not apologise]’ begins: 'never apologise / your inner amer / ican reserves g / rief plain cont / ortions of cons /istencies never / manifest plan i / ts ritual exe' (74), and ends despairingly with 'we shall do and / do again'. The poem ‘[after error]’ is a most elegant domestic: 'smother up take / a sofaful of mi / stake an armada / of already done / a sack of canno / t take back rem / inding you ever / and ever more d / amned than before / re take highest / ground and lowe /st ebb' (59). A tirade on politics, ‘[losing political will]’, begins with 'political party / model for noone / no tiddly tidal / game' and ends: 'fallen and dead / more often than / got shitzenship / fractured right / s duties onus a / dill a minute a / slouch and bump / meanwhile power // shops your hear / t you lose your / ear for truth i / s dare no thing / cozy is all con / serving all con / verse at stunts / mumble shrug on' (56). ‘[On the square’]  thumbs its nose at the sacred concept of measuring things: 'square squantum / a bit chunked o / ff equal and cr / isp and even co / ol as angle tha / t sharp interst / itial cornerdom / of block standb // y cube the coun / t one and two m / ore exactly one / than a circle s / saying naught sq / uare sits so ev / en before its l / eft or right th' (91).

Most of the four-poem groups taper off somehow at the end, but we’re left unsure as to why: are they complete-as-incomplete? or are they pointing the way to a future that’s uncertain and may or may not be up to us to complete? Even in a stripped-down version, these poems aren’t easy to read, or at least not easy to read quickly, and I’m assuming this is Mansell’s intention. Most of us bob around all day in a bottomless pool of language, and it’s easy to get into the meaning without bothering with the form. Poems like these are a confrontation with language, forcing us to slow down and take a careful look at where we are swimming and how we got there. Some of cummings’ / Cummings’ poems – for example, ‘l(a’ and ‘dim/i/nu/tiv’ – make the same point, I think.

This, of course, gets us into the vis side of things. For starters, Mansell makes a great point of her use of the Prestige Elite typeface for these poems. It’s certainly the case that she needs non-proportional spacing or the whole idea wouldn’t work, but why this one, instead of, say, Courier, which has the advantage of being MS-Word-friendly as well? Maybe she is being ironic, playing off the classy-sounding ‘Prestige Elite’ name against the historical fact that this typeface was bog standard in IBM typewriters from the 1950s until PCs took over the world.

I have difficulty seeing how the red sections should be handled. Do they only make sense when read aloud, as the author specifies in her afterword? In that case, shouldn’t we be talking about a three-dimensional vis-aud-po? Sometimes the red does seem to reproduce a sound, almost turning a slant rhyme into a visual equivalent of a descant. I suspect, though, that without hearing a performance I will miss out on a major part of the poems’ impact.

Look at this poem, ‘[australian pasts]’, one of several poems of place, dragging in politics and bringing along its own musical instruments. 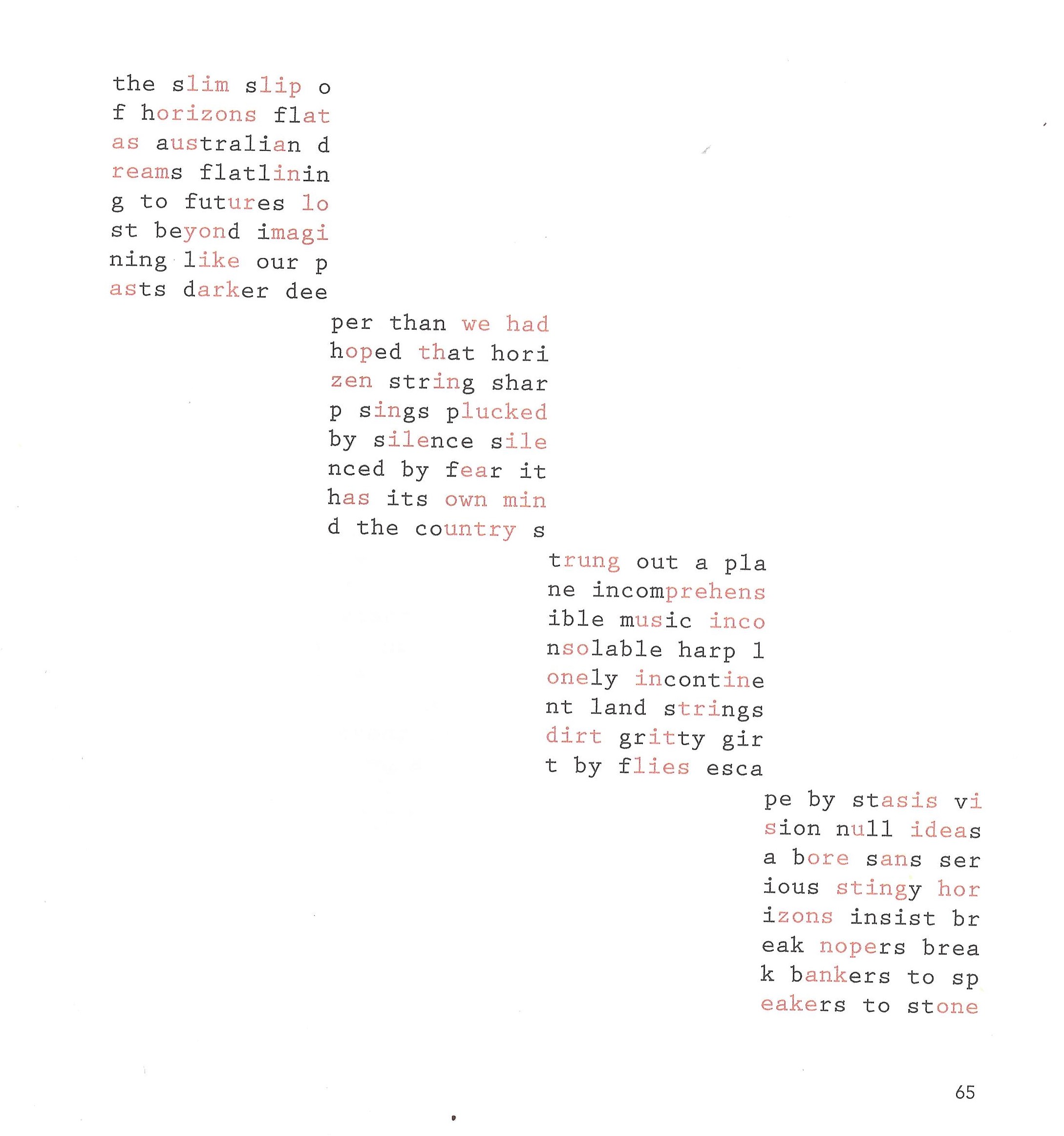 Reading this, I start getting frivolous ideas about the poet as architect and the quads as building blocks – rough-hewn sandstone, of course, as befits the 'australian d / reams flatlinin / g to futures lo / st beyond imagi / ning' (65). So then the red letters make sense as irregular crystals reflecting light in their own way from the surface of a formal structure. Or maybe not: the quads are certainly a stimulating read and a fascinating poetic invention.

Free Will and the Clouds

The Intimacy of Strangers

by Philip Porter and Andy Kissane