The Fox Petition by Jennifer Maiden

Melissa Parke, politician from Western Australia, signed the Fox Petition and wished they had permits for fox desexing and vaccination in Western Australia. Melissa Parke, MP, it seems, would have also approved of that other Fox Petition, after which this collection of poems is named, one presented by Charles James Fox, an eighteenth-century Whig politician. Leader of His Majesty’s Opposition, Fox petitioned for the rights of all people, so the dust jacket tells us, including freedom of speech and habeas corpus. Thus, Jennifer Maiden links the 2 main themes of these poems: politics and "biosecurity".

The highlight of this volume of poetry for this reviewer is five poems which see politicians in dialogue with dead mentors.  In "The Possibility of Loss" Mahondas Gandhi shares orange segments and sips of fresh goat milk with Barack Obama.

Gandhi shared an orange, to explain: "The problem

with a just war is that you have to win.

My philosophy allows the possibility

of loss, indeed it welcomes

losses, sometimes as a reason to go on."

In "Victoria and Tony 6: The Famine Queen", Sir Anthony Abbott jumps to Queen Victoria’s defence, as usual, saying "Oh, Ma’am, no: You are always my source of nutrition." While in "Victoria and Tony 5:  The Hunter", the Queen, having woken up crossly in Canberra declares: "You have unprotected the poor and the wild geese, whilst knowing yourself as one. Yes, we can pray, but the only prayer of a hunter is the gun."

In "Hillary and Eleanor 11:  Maintenance is Power", Hillary Clinton shares her chintzily-decorated black armour-plated van with Eleanor Roosevelt. This odd couple makes us laugh at the ridiculousness of politicians. These poems have sombre notes also. In "Diary Poem:  Uses of Xenophobia", Dietrich Bonhoeffer puts Manus Island in the same space as the German Jews. He counsels his protégé Kevin Rudd:

"Except again that there wasn’t a problem,

could you have said that?"

Later, the two "sit together in a quiet impasse that Kevin finds more soothing than an easy absolution".  In "Sumptuous Light", Pericles wakes up next to Alexis Tsipras and opines on democracy:

the work of the man in the market,

not the work of the patriot. It

spreads below us in dancing pieces, through

These poems are brilliant political satire. The poet deftly deals with complex political situations and uses humour to deflate heavy topics such as human rights, poverty, war, drug smuggling, foreign aid, religion and international relations. These poems are free verse and their strength is deft execution of a clever concept rather than poetic beauty of imagery or form.

"Biosecurity" and the link between xenophobia and the way introduced animal species are treated in Australia is another theme in the collection. The apogee is "The Honourable Carina Monckton and the 'pregnant, pet-and-small-child-eating' South American Boa Constrictor Released Accidentally by Police on the Queensland Gold Coast".  The Hon Carina Monckton rescues a snake being pursued by biosecurity officers. She finds him in Gold Coast bushland, "tightly wound around a wet lantana".

And the snake thought:

Yes, she may yet take me back to

She covered him in patchwork, carried him

Warned her about bites and germs in general.

To the private air-field in Colombia

She had rented from some Escobar, she patted

In the rain-limp Gold Coast, officers

Giving up the hunt, leafleted slow

This poem is hilarious satire which shoots a poisoned arrow into the heart of excessive bureaucratism and "biosecurity".

George Jeffrey and his sometime lover Clare Collins feature in 3 poems and Clare in another one. Two of these are set in Greece. "George Jeffrey 18: George Jeffrey woke up on Kos" is replete with contemporary references such as IS, Frozen the motion picture and Syrian refugees. Maiden skilfully layers metaphors, producing comic effect. Early on in the poem, the Kos Police Station reminds Clare of the palace in Frozen. Clare reminds George of Elsa in Frozen.  Seven pages later:

out, they hired a car for Old Pyli,

to meet a refugee in a tavern on a mountain

on the way up to a castle in cold clouds.

By the poem’s end:

Harbour as they returned to it was a special

Radiant rainbow from nightclubs, the lofty

Police station on its water bone-white and pure as a phantom castle.

There are also irreverent touches in this piece. George, Clare, Adnan a refugee and Rima the Syrian translator sit at a table "with its checked starch tablecloth, new wooden chairs glowing blonde in the blonde glowing air". A statue of Europa being carried off by a bull was "elsewhere". A statue of Artemis is described as a perfect oxymoron, in the divine Greek fashion: she protects suckling animals but hunts and kills them.

The poet evokes the senses to create atmosphere: George, Clare and friends watch a goat

… pick his way down sheer

soil in the glare of a sudden, bone-bare

The goat later leads them to a broken church with moon-bare columns – another example of layering of metaphors.  This poem runs to more than 15 pages and sits on the border between poetry and prose. It has more of the tropes of storytelling than poetry.

Maiden began her first George Jeffrey poem from her 2005 collection "Friendly Fire" with George Jeffrey waking up in Kabul. She applies this device, of characters "waking up" in specific locales with specific people, to begin ten poems in this collection. Maiden also plays with this device at the tail end of "Diary Poem: Uses of Xenophobia":

Clare wake up in Nauru now:  as she might:

and I have not forgotten habeas corpus.

Fox metaphors feature in 5 poems. A number of similarities exist between poems in this collection and "Foxfall 3: Significance" from collection "Friendly Fire" (2005). The last words of Charles James Fox appear in both "Diary Poem: Uses of Xenophobia" and "Foxfall 3:  Significance". "Once I Met a Fox" and "Foxfall 3: Significance" both refer to Asian mythology and to meeting a fox on a road. "Diary Poem: Uses of the Female Duet" refers to C. J. Fox as the poet’s favourite politician. One line in "Foxfall 3: Significance" reads "CJ Fox is one of my heroes". It appears that the poet is recycling her own words and concepts. Is this deliberate? If so, why did the poet do this ten years after the first fox poem was published? Recycling might be good for environmental preservation but for a poet it is not original and leaves this reader’s appetite for fresh poems unsatisfied.

The poems bravely tackle politics, bureaucracy, especially of the biosecurity kind, hypocrisy and tragic matters such as Gillian Triggs’ report on Refugee Children in Detention, Clare’s murder of her 3 siblings when she was a child, Obama realising the futility of shooting Bin Laden and animals burning to death in a boarding kennel in a bushfire in the Adelaide Hills. This reviewer is impressed by the contemporary references in the poems, for example, metadata legislation, Tony Abbott and Malcolm Turnbull’s leadership struggles, refugees in Greece and the Charlie Hebdo attacks. The Fox Petition was first published 2015 from the Writing and Society Research Centre at the University of Western Sydney by the Giramondo Publishing Company. The speed with which these poems have been written and published is impressive. The trade-off against this is, however, that the volume appears to be "light on" in terms of content.

Greece seems to have inspired Maiden to write the best metaphors in this book. "George and the Holy Holiday" is a long vignette or snapshot with one compelling metaphor: "the foaming sea lace like the edge of blood after a knife goes in". It meanders, stream of consciousness-style to an eloquent end. In "George Jeffrey 18: George Jeffrey woke up on Kos", Clare "puts on lipstick the pure rose of an Aegean sunset". In "Clare and Thessaloniki":

The pirate ship neared the shore,

In a sea with sumptuous light …

However, some imagery is obscure.  For example, "Death by Dissonance", the first poem in the collection, fails to deliver. "Orchards" ends with a metaphor about cherry blossom that eluded this reviewer. "You only get one go" ends with a fox metaphor which seems unclear.

Some exquisite interactions between humans, animals and the landscape are described in "George Jeffrey 18: George Jeffrey woke up on Kos".  George looks

A half-natural, half-human scaffolded ledge at

Later in this poem, Rima

plainly needed to go to earth, some spot

In which to crouch and recover.

Eight or perhaps nine of 17 poems could be classified as ecopoetry.  For those that are not ecopoetry, animals and plants exist to portray the private realm, for example, the cherry orchard in the Adelaide Hills where Julie Bishop grew up. Many of the poems convey wisdom. For example,

any institution seems more powerful than human love or loss

lights and voices of days end were now more solemn

With tasks done in tiredness, opinions

simpler near to sleep 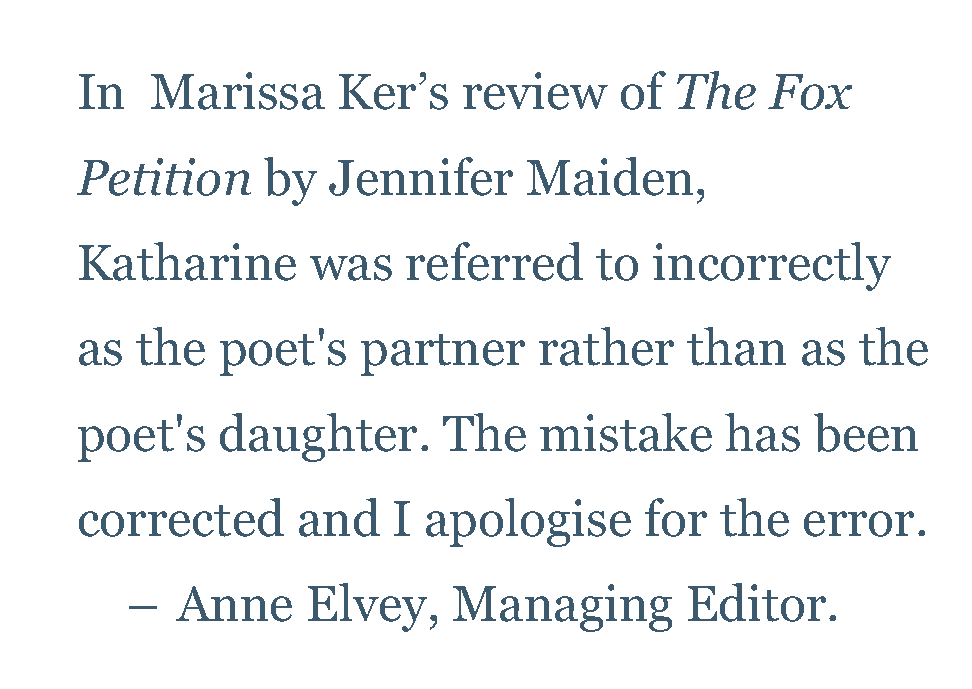 Three poems are diary poems. Each diary poem is free verse. One – "Uses of the Female Duet" deals with sisterhood, feminism and modernity. It is both political and poetic and its crisp language traverses public and private spheres.  In one anthropomorphic anecdote, Maiden's daughter Katharine imitates a cat. Indeed, the poet leaps from one subject matter to the next like an agile feline. The poem’s final words

Of all time is Charles Fox and indeed she [Melissa Parke]

do not relate to female duets. Therefore the poem does not end strongly. However, this may be a deliberate conclusion to a stream of consciousness style poem. The ending of "Uses of small dogs" is stronger: "the truly biosecure: all mercies now interdependent as species". If a poetic form is to give a poet a structure, a diary poem seems to be an invitation for random reflections. The result is somewhat slapdash.

This volume features tantalising poems of brilliance. However, overall, there is something lacking.