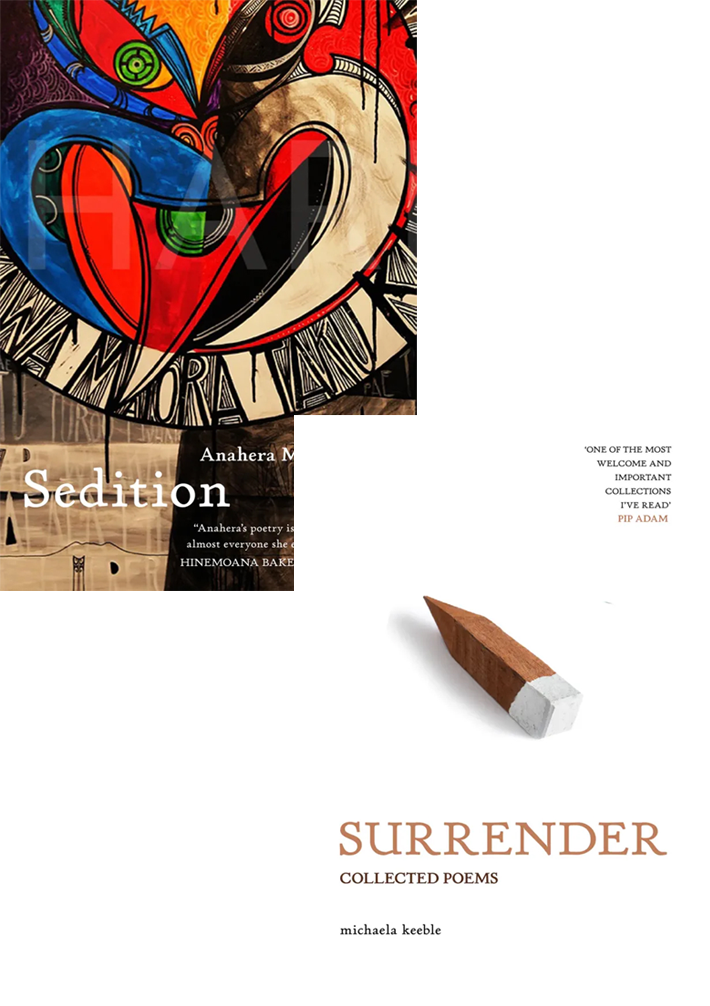 ‘The grief of birds’: The ecopoetry of Anahera Maire Gildea (Sedition) and Michaela Keeble (Surrender)

Mexican ecopoet Homero Arijis has said that protecting Monarch Butterflies in Michoacán, Mexico, is ‘the environmental cause of my life’ (Castello y Tickell and Migne). When I hear Arijis say this I stop on the damp path by Maiwar—the Brisbane River—where I’m listening to the author read his poetry on a podcast. ‘What is the environmental cause of my life?’ I wonder. Arijis invites us to look around. ‘The environment for me,’ Arijis continues, ‘is the poetry of life’.

I have never really understood poetry. I love it. I teach it and write it. But I don’t seek to understand it. Instead, I delight in being drawn into an incomprehensible world. Perhaps that’s the reason I’ve felt a little leery of the form over the last few years. In the truly terrifying space that is the current ecological crisis and pandemic, where things move so fast, is a poetics that plunges us deeper into incomprehension a place we want to be?

As if in answer, two new collections arrive the week I test COVID positive. From the contradictory state of that illness—at once necessarily isolating and globally connected—I launch into environments that truly embody uneasiness. Anahera Maire Gildea’s Sedition and Michaela Keeble’s Surrender, both released in 2022 through New Zealand publisher Taraheke | BushLawyer, connect with language, family, heritage, colonisation and place. First Nations Ngāti Tukorehe poet Anahera Gildea’s collection is a bilingual passage of language and loss; while pākehā[1] poet Michaela Keeble explores grief and whiteness. I read both collections through an ecological lens because, as academic Katharina Maria Kalinowski says of the language of ecopoetry, they are at once beautifully ‘deconstructive, radical, illusive, dreamy, melodious, innovative, multilingual, synaesthetic, romantic, experimental, angry, sad, critical of [their] own existence, critical of being classified’ (Kalinowski).

In the introduction to Ecocriticism and Indigenous Studies, Joni Adamson and Salma Monani recognise how the ‘ontological turn’ in art making and scholarship is just catching up to established Indigenous knowledge, where ‘current ontological concerns parallel Indigenous thought around nonhuman agency and material vitality, embraced in the aforementioned concepts of whakapapa[2] and whanaungatanga[3]’ (26). In locating ecopoetry specifically in Aotearoa, poet Janet Newman also highlights ‘an ecological consciousness in poetry, which is significant in a country with a literary focus on the natural world’ (Imagining 49). In her PhD thesis Newman points out that there is a distinct lack of the term ‘ecopoetry’ in critical New Zealand poetics, despite the prevalence of what poet Hera Lindsey Bird has joked (also noted by Newman) as ‘too many poems about mountains’ (49). Ecopoetry insists on connection or perhaps entanglement. Animal studies philosopher Lori Gruen describes human relationships with the more-than-human world as a ‘practice of entangled empathy [that] gives me hope […] hope in the connections that entangled empathy reveals and reworks, and the possibilities it helps us imagine’ (41).

I come to a reading of these works from a tangled position, as a settler colonial Australian author living in Meanjin—Brisbane—on Turrbal and Jagera Country. Until recently, I was lucky enough to live as a tauiwi[4] in Aotearoa for almost three years where I read and taught Gildea’s work and once performed alongside Keeble. I also come to these bilingual te reo Māori[5] and English works, particularly Gildea’s, as a monolingual speaker of only English. In this review I celebrate the layered possibilities of reading such works through the understanding that, while I can access these poems, many of them aren’t for me. I come to this through the work of poet Nadia Niaz, who observes that ‘poets who write multilingually negotiate and deploy their cultural knowledges in this mixed context, who they write for, and how their audiences – those they write ‘for’ as well as those they do not – receive them’ (35). In her stunning essay on grief, Gildea has also said that ‘wherever there is a need for translation there is discomfort’ (Bone Shame 1). It is a necessarily uncomfortable space that Sedition and Surrender take us to, while holding the reader in an artistry of language that is unique to each collection.

Anahera Gildea’s ‘Sedition — a letter to the writer from Meri Mangakāhia’ was one of the first poems I read when I moved to New Zealand in 2019. This epistolary piece urges kōtiro[6] to ‘[…] go on, get / your sedition on girl / your agitator, your defiant speak’ (Sedition 42). I was introduced to the text through a bicultural university creative writing and arts course that I inherited at Massey University. ‘Sedition’ fizzes with power—I could feel it in the classroom, even as I presented the text to emerging writers in an environment that I was new to. In creating this space, Gildea reminds her readers of the potency of language in a country where ‘Māori been jailed for nouns, phrases’ (42).

The impact of ‘Sedition’ extends over what is now a whole collection. Many of the poems follow its instructional form of address through an awareness of the effects of language and the dichotomy of a bilingualism that is embedded in the violence of colonisation. ‘I am ten years old,’ Gildea writes in ‘10’, ‘when Mother England shames me / again and again until I cannot breathe’ (41). On an ecopoetical level, Newman notes that ‘a greater sense of entanglement between people and nature is represented in ecopoetry which reflects on the relationship between Māori and nature, and between nature and settler-colonial nation building’ (Not a Capture).

Gildea moves through themes of language, ecology and invasion through verse imbued with a oneness with the environment, describing ‘the ways in which birds have been silenced / shot down / made extinct / thousands reduced to three small voices / to be colonised is to be taken out / of our nests’ (23). Gildea’s bleak humour also shines through—to a pākehā neighbour in ‘Speaking rights’ she states: ‘good on you, for learning the reo / man you must be so proud’ (83); while in ‘Close to the bone’, a ‘voyeur’ gathers ‘inspiration of specimens / your colours raised / on those pawned bones / bones as prizes / bones on plinths / boners on display / upright like pricks’ (15). This laughter has splinters—the effect of entanglement, the recognition of truth, a writer who is generous enough to bare the burden of that truth telling ‘without embellishment / or apology / to have the courage to accept / that those you speak to / may poke fingers in their ears / or hop around the room / going la la la la’ (67).

If 'Sedition' sets the titular tone for the collection, the poem ‘Ihumātao’ rings out as central to the collection’s intentions. I opened with Arijis talking about ‘the environmental cause of my life,’ and for many, Ihumātao is that cause. This Auckland site is of deep significance to Iwi[7] who arrived as early as the 1500s, and it is also a site of conflict from developers and government, although the land was recently bought back by the Crown for protection. Of Ihumātao, Gildea writes, ‘There are lines between us / connected stretch marks / the body lands sharp / the haehae, the toto of Rangi that scars the morning / there to touch’ (105). Writer and film maker Simone Kaho also talks about an uncanny feeling of recognition on visiting Ihumātao for the first time, the feeling that ‘my feet are somewhere I have come to know’ (Kaho).

Gildea’s poetry offers the chance to return to a place we didn’t know we were looking for—whether that be a place of belonging or a poetics of reckoning.

Kebble is writing from and about this environment in her collection about grief: of culture, of parents and of environment. These themes of loss are embodied in the poem ‘mother, model’. In this piece, the narrator asks for a description of climate modelling, and ‘he tells me it’s like when / your mother is sick / and you receive the diagnosis’ (9). Climate modelling involves a complex analysis of land, water and air using mathematical techniques. Kebble, in what must be the most concise explanation of climate grief I’ve encountered, is able to engage on a visceral level here and throughout Surrender. The sorrow of ‘mother, model’ is deeper though, for ‘jonny doesn’t know / my mother died / of lung cancer’ (9).

Ecopoetry engages with dual states of place and being. To write the ecopoetry of Aotearoa and Australia is to write land on which First People bare deep knowledge; it is also to write a colonised and capitalised space. Kebble’s entanglement is with her identification on multiple cultural planes, as an Australian-born person living as a pākehā in Aotearoa and who engages deeply with Māori culture. Kebble addresses this head on in the wry ‘bone broth’ where ‘white poem’ goes on a colonising holiday—‘not a guilt poem / not a shame poem / no shame in / white poem’ (26). ‘bone broth’ seems in conversation with Gildea’s ‘Taitangata, tai moana’, where ‘good indigenous design disrupts / the muka of the people’ (Sedition 91). Indeed, Kebble acknowledges Gildea (in ‘lick this thing’) and many other poets throughout the collection as part of an ongoing dialogue with place, people and culture. In return, Gildea’s title page is shadowed, upside down, by the title of Kebble’s collection, as though one was standing on the bank and the other reflected in water.

Kebble’s connection to Aotearoa is always tempered by language that recognises how much there is to learn. In ‘talking with strangers’ a humpback whale breaches near children who ask, ‘are you hurt? […] / or sick? Have you lost your mum?’—at first the whale is the stranger, until the ecocentric turn: ‘we knew the whale was fine / a wayward toddler talking with strangers’ (105). The decentering of the human in this poem brings the discomfort of interspecies communication along with a deep acknowledgment of whales as creatures with a storied presence in Aotearoa.

The collection’s careful engagement with Aotearoa is concluded in the sublime ‘only the ocean’, which ‘gives warning: / what will change / and when / so it doesn’t come across / like violence’ (117).

Both Sedition and Surrender are the work of publishing collective Taraheke | Bushlawyer, where Indigenous women and allies ‘protect story sovereignty from the appropriative juggernaut of the book industry’, using the banner ‘landback through literature’ (Taraheke). At once a joyous soar through language and style, both collections bare the weight of entanglement and estrangement with the more-than-human world, at once unique, while also in dialogue as poets in Aotearoa. From Kebble’s engagement with birds through pregnancy, ‘when a silvereye / touched down at my hip and stayed / and we walked a while, talking’ (106) to Gildea’s ‘Kuku’: ‘on my left hip is the grief of birds’ (Sedition 110)—these poets have landed.

[6] Girl (this is my limited understanding of kōtiro, which could also be translated as ‘daughter’)

[7] People of a particular place